Whichever team you were rooting for, Sayulita or San Ignacio…whoops, I mean, San Francisco or Baltimore, there was no better place in town, or perhaps on the entire west coast of the north American continent, to watch to the Superbowl on Sunday than the rooftop bar at the Sayulita Public House here in town. With pubmeister Storm Richardson grilling burgers down on the street, a pot of chili on the stove, the beer, tequila and wine flowing, and spirits high as we all watched TV with another technicolor sunset backlighting the video screen, it was awesome in that weird way that artificially lit and powered TV can be, colliding with the far more visually intense reality of the natural world here. 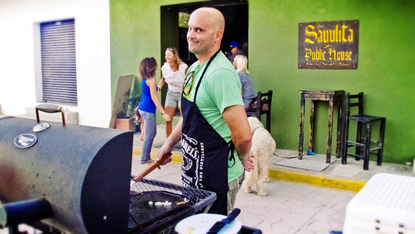 But now and then you like to forget the natural world and plug into NFL reality, especially for such a major American event as is the Superbowl, and we are thankful that there are several bars and restaurants here in town that showed this game and show many others, American TV style. Beyonce kicked ass in her half time show, on this I think we all agree.

This being a west coast town, most of the crowd was disappointed by the Baltimore win. Beyond that, the weird power outage in the second half that delayed the game for 30 minutes or so is worth noting. It was like, are they playing it here in Sayulita, where power outages are part of the deal? But no, this was New Orleans, where stuff apparently goes wrong just like here. In any case, the rooftop burgers, wine, drinks, and beer were great. Good work Storm and Courtney. A splendid time was had by all.