Home blog > Can You Eat This? Jackfruit

This is the first in an intermittent series of blogs about unusual fruits, and maybe a few vegetables, that we find in Mexico and not in the US or Canada. At this point, thanks to refrigerated truck travel and other gas-guzzling, global-warming conveniences, we are all quite familiar with the usual suspects, as far as tropical fruit goes: begin with your now-universal banana, throw in the mangoes, pineapples, and papayas, and it would seem that gringos sort of know their way around what grows on trees down here. 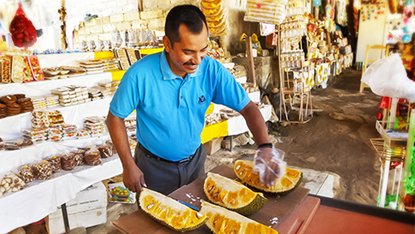 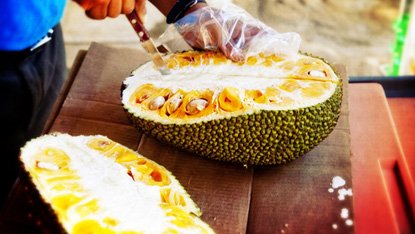 But hold on! Take a good look at this thing. Maybe you’ve seen it around where you live (possible if you have a sizeable community of Asian immigrants in your neighborhood) but I would guess not. It is known in English as a jackfruit, in Spanish as a jaka or yaka, and it is one strange-looking critter. It looks like something a vegan dinosaur might feed on if they were still around. It is also the largest fruit on earth, growing up to 80 pounds in weight, and 36 inches long. That’s 36 kilos and 90 centimeters, for you metric types, but however which way you measure it, it is quite the mighty fruit. 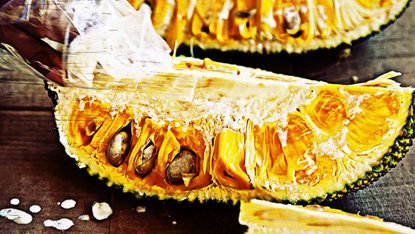 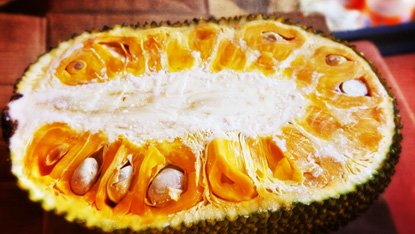 The data: the tree that produces this fruit is known scientifically as Artocarpus heterophyllus, from the mulberry family. It originated in Southeast and South Asia, and has been cultivated as a food source for at least 3000 years; the name jackfruit derives from the Portuguese jaca, which in turn derives from a Malayam language word, chakka. In any case, jackfruit trees at some point found their way to tropical Mexico (and much of Latin American and the Caribbean islands as well), where they have flourished. In season, there are great heaps of them at fruit stands up and down Highway 200, especially in the small towns on the coast just south of San Blas. 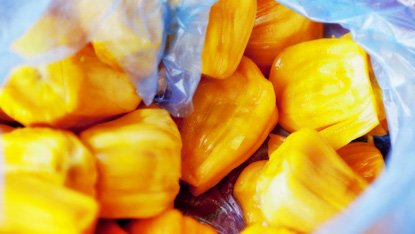 The edible part of the jackfruit takes a bit of work to get at, as is evident in the photos. The man who demonstrated jackfruit prep technique is Gerardo Gonzalez Vargas, who runs one of the fruit stands alongside the road in San Ignacio, just south of Sayulita on the highway. The first thing to know, he told us, is that the fruit is ripe when that gnarly-looking, bumpy green skin is soft to the touch. (He also told us there is a video demonstration of jackfruit prep on Utube, should further instruction be required.) 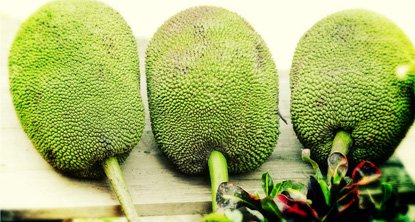 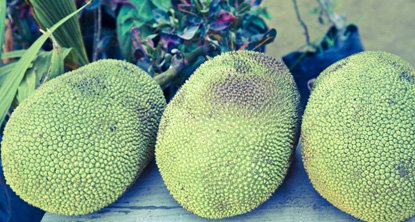 You take the ripe fruit and quarter it, revealing a sticky, orange and white mass. The stickiness is intense—the white stuff is like glue, and you’ll have to work hard to clean your knife when you’re done. A good method shown us by Senor Gonzalez was to put plastic bags on your hands (or rubber gloves, but then you’ll have to clean them) and just rub all the sticky stuff off the interior of the fruit. Then you simply cut out and clean the edible drupes (individual fruits that form within one large massive fruit are called drupes in the language of botany), which are, as you can see in the photos, a warm, bright orange color when fresh. Each drupe also contains a large, smooth seed which needs removing. They have a sweet, relatively mild flavor, in the neighborhood of apricot, banana, or cantaloupe, or…well, they do have their unique jackfruit flavor, and people report that it changes after being in the fridge for a while. Sometimes new fruits are hard to love when you discover them later in life, but the jackfruit is well worth a try. On the nutrition side, jackfruit is rich in vitamin C and high in fiber, so it is of great benefit to both the immune system and the digestive system. 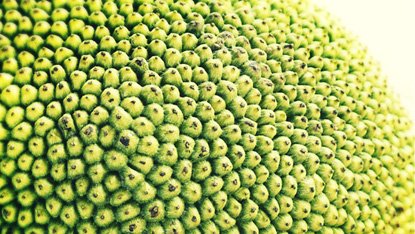 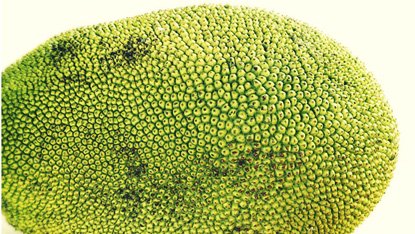 The drupes can be eaten fresh, blended into smoothies, dried into chips, or frozen for later use. In India, they make candy out of some varieties, and use it for side dishes, as a snack, and as a source of juice.

When you see jackfruit for sale at the roadside—look for the yaka or jaka sign–you’ll see it in two forms: the whole, bumpy green fruit, and the drupes, offered in clear plastic bags, usually cooled. These drupes are obviously pricier by the pound, but if you buy that “finished” product you’ll save some time and mess. On the other hand if you do it yourself you’ll learn your way around the fruit, get it fresher, and save a little money.

Either way, it’s an interesting, distinct new flavor to add to your fresh fruit palette.