A fugu is a type of pufferfish whose liver, intestines, and ovaries, served raw in paper-thin slices, are considered an exquisite (and very high-priced at around $200US per plate) delicacy in Japan. However, these fugu fish organs also contain a natural poison called tetrodotoxin, which is about 1200 times more deadly than cyanide. The poison is so potent that a lethal dose is smaller than a pinhead, and a single fish contains enough poison to kill 30 people. Aside from the golden poison frog, these fishies are the most poisonous known vertebrate in the world. 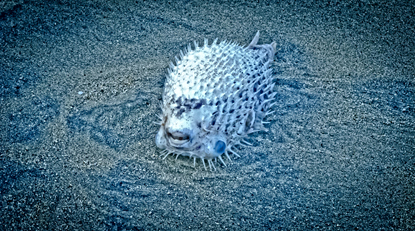 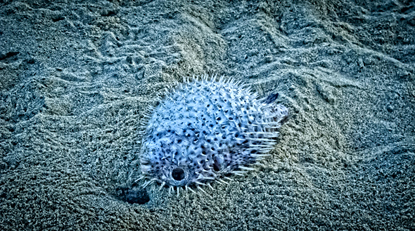 I’m sure the flavor is marvelous, what could be more delightful than raw fish guts! But I wonder if that brush with death in a piece of sashimi is what give the fugu its awesome rep. After all, most of us lead sheltered lives. Killer sashimi might be as scary as it gets. 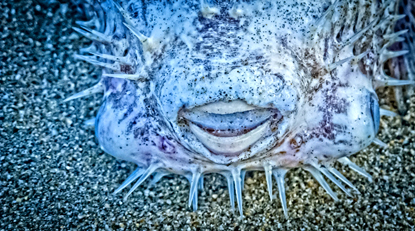 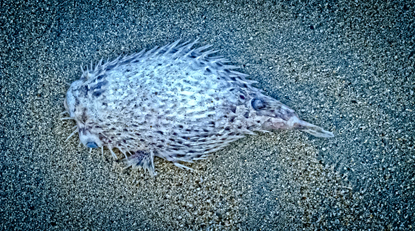 Chefs have to have 2-3 years of special training to obtain a license to prepare fugu for human consumption. In spite of all that training, every now and then someone dies from eating wrongly prepared fugu. Not surprising, such deaths, considering that the Japanese eat 10,000 tons of it every year. 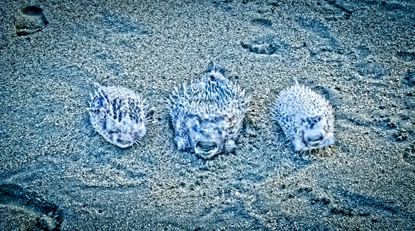 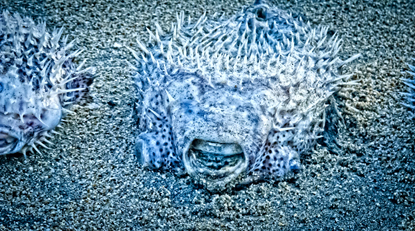 Anyway, not to disappoint those among you who were ready to head out onto the Sayulita sands, grab a couple of these guys, and start carving up their livers, but the spiky critters pictured here are not actually fugu. They are porcupinefish, also known as blowfish or balloonfish, similar to and often mistaken for puffers, but from a different family. They share the same talent for filling up with air or water–blowing up like a balloon–almost instantaneously when a threat is perceived, and many puffers and porcupines also feature an array of sharp spines which stand up vertically when the fish “inflates.” There are a couple of types of sharks that can digest these gnarly critters, but otherwise, between the spines and the poison, they pretty much kill what eats them, unless that highly trained Japanese chef steps in to do the carving. 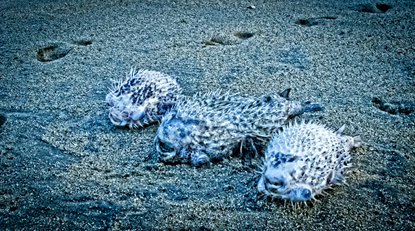 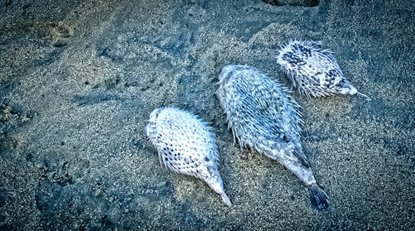 Porcupinefish often wash up on the beach in Sayulita, most often when there are shrimp boats offshore, as there were last week. Half a dozen or more such boats were floating out there for a week or so. When they catch shrimp in nets, they catch other stuff as well, including porcupinefish, whose spines and inflationary tactics are obviously useless against a shrimp boat net. 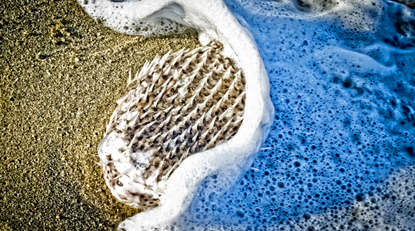 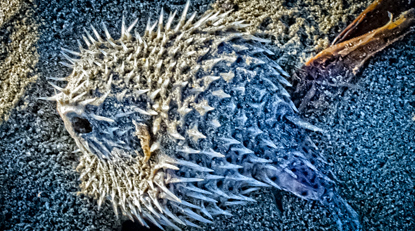 The shrimpers then dump their dead inflated bodies overboard, so that they may wash up on the beach and draw curious dogs and children over to look at their weird, spiky bodies, their comically ugly mugs, and their general oddness. You hate to see things dead on the beach, you hate even more to see your dog try to roll over and writhe around on top of one of these suckers. But regardless of that, these porcupinefish didn’t deserve this miserable fate at the hands of a scruffy crew of shrimpers. But then, there they are, weirdly compelling seaside attractions on the Sayulita shore.