There are numerous types of birds that pass through this north side Sayulita neighborhood on a regular basis, and you’ve seen a few of them in the blog. However, there is some seasonal variation to the bird scene here on Calle Chiripas; for example I can’t quite figure out why the huge flock of orange-fronted parakeets that was hanging out in the trees by our house just disappeared a few weeks ago. They size of this large and rowdy crew had been growing by leaps and bounds, and as loud and squawky as they got–these are not songs birds, these are shout birds!–their busy, colorful dashes through the trees, yelling madly all the while, made me happy every day. I’m hoping they migrated somewhere else, and did not fall into the clutches of the men who sell caged birds at the road side in San Ignacio. 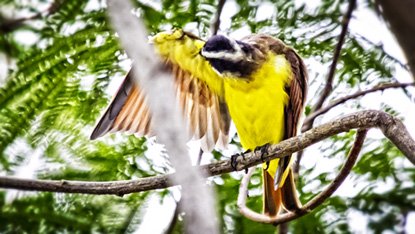 Nor do I know why the bright yellow-breasted passerine (perching) bird shown here suddenly began making appearances in our trees recently. But there he or she is, yellow-breasted with a striking, boldly striped white and black head, making a home in the neighborhood. These birds are called Great Kiskadees, and they may be be found thriving all the way from southern Texas down to Uruguay, and over much of South America and the island of Trinidad. The Great Kiskadee, which grows from 8 to 11 inches in height, has also been introduced to Bermuda and Tobago. The bird’s distinctive call, a kind of Bee-tee-Wee sound, has caused people in Brazil to call it the Bem-te-vi, and in Spanish Latin America, the bien-to-veo, or “I see you well.” This funny little song is not so pretty as to make the Great Kiskadee attractive as a caged songbird, so this lucky creature has not been too negatively affected by the bird-poaching trade that has done so much harm to wild bird populations (witness the roadside birdsellers in San Ignacio). 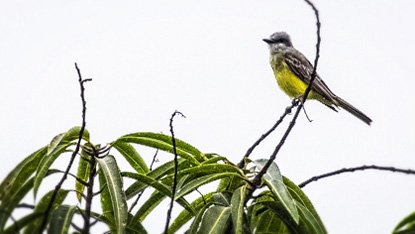 The scientific name is Pitangus sulphurus, and a more common name for a wide range of birds of this type is the tyrant flycatcher. This is the largest extended family of birds on earth. The kiskadees operate solo or in pairs, not flocking, and are prone to aggressive behavior, often challenging much larger raptors when being bothered. This behavior is enhanced by their talent in flight—they are fast and highly maneuverable. Although a member of the flycatcher family, athe Great Kiskadee is also known to eat fruit and even small mammals. Generally, you’ll see them perched on a branch, and then make a sudden darting flight to snatch an insect out of the air.