Often if you walk Sayulita’s beach early in the morning, you’ll see a couple of surf fishermen, locals and/or visitors, out there, flinging their lures as far into the waves as they can. You also see another kind of fisherman—a Mexican with a hand-held net, stalking baitfish along the shore. There are several of these guys who seem to have attained a high level of expertise in this specific type of fishing—they don’t just fling their nets randomly, but instead they watch for and stalk the fish, and then when they spot their prey they quickly fling the net out, and almost always catch something. They’re usually hunting mullet, but there are also perch and a few other kinds of fish in close to shore, and its all fair game if you’re hunting bait. 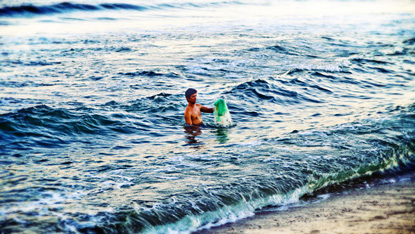 The nets are maybe two meters in diameter, circular, and weighted around the edges so that they sink evenly over whatever is under them. The fisherman then quickly closes the deal, wrapping up whatever he’s caught and hauling it in, throwing the catch in a bucket or a pit dug in the sand, and then carefully gathering the net in his hands for the next throw. They’re fun to watch, moving in and out of the water, from onshore out to chest deep, working through the waves, intent on the hunt. 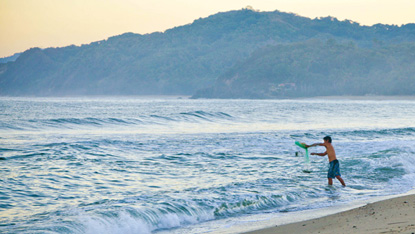 One of these fishermen is Jorge Pantajo, seen here. Educated in marine biology, Jorge is on the beach almost every day, either surf fishing with a pole, flinging his lures into the waves, or net fishing around the rocks north or south of the rivermouth. I also see him out in the waves, riding a longboard; he surfs quite well, although I never see him out there unless the waves are big. He’s got other fish to fry. 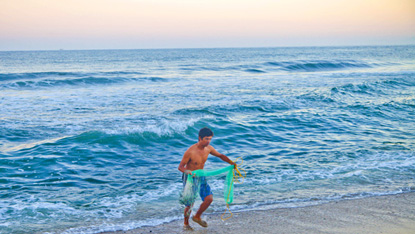 Jorge’s business is running fishing trips for visitors, but not by boat. Instead, he takes people surf fishing along the shore, or takes them straight out to sea from Sayulita Beach in kayaks. That baitfish he nets in the morning is used to fish in the afternoon. It’s a different way to fish, maybe a little more adventurous. And there are plenty of fish out here in Sayulita Bay; he reels in dorado (mahi-mahi) all the time, not far offshore. You can find him at 322-170-0990 or email: jorgepopperman@gmail.com. You’ll find more information at http://sayulitakayakandsurffishing.blogspot.mx 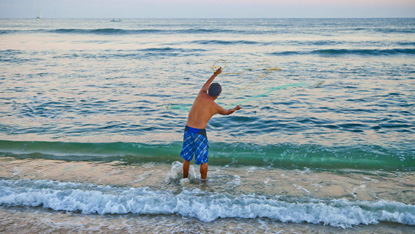 Meanwhile, if you should happen upon Jorge or any of the other net fishermen working the edge of the ocean with their nets, dancing with the waves while catching fish using this old school method, stop and watch a while. It’s one more unexpected, unusual element in the Sayulita mix.