Heading out to sea from Anclote is one of the day trips around here that one should simply NOT MISS. There’s a whole seaborne world out there to be explored, and there’s nothing like climbing into a panga moored between the jetties at Anclote, and motoring out in search of whales and other wonders.

We went on Sunday, January 13th, with Alejandro, one of the boat guys who works for the Mictlan Surf School, in a panga called Quetzalcoatl. Mictlan has a small fleet of these perfectly maintained, fine white pangas, each with a canopy roof, underseat space to keep your stuff dry, and plenty of seating. Obviously, given the name, they specialize in surf trips and lessons, but they have the whalewatching, birdwatching, and snorkeling safaris wired as well. The weather was less than perfect, a blue-grey sky and a brisk wind rendering the scene about as wintry as it ever gets around these parts. We headed out around 9:30 in the morning, at high tide, and the wind was already blowing. 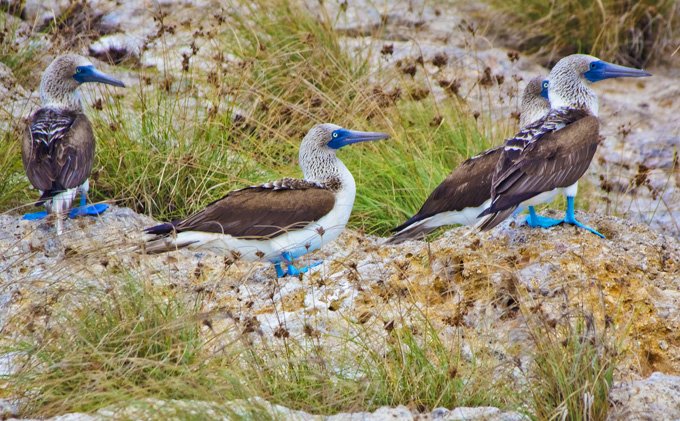 However, since we happened on a family of humpback whales less than half a mile offshore–almost immediately, in other words–the brisk wind and coolish weather quickly ceased to matter. With Alejandro expertly but quietly sticking close to the whales, we were able to watch them playing, rolling, spraying from their blowholes. I even got a little whale spume in the face, an interesting experience. Whale snot, anyone? On this particular day none of the whales in this family—we could easily tell that the group included a mother, father, and baby–was into major breaching or any of the other more dramatic moves they make when they get their big bodies or tails out of the water, but still, it was a great whale viewing session, with plenty of time in close proximity to these massive, amazing creatures. 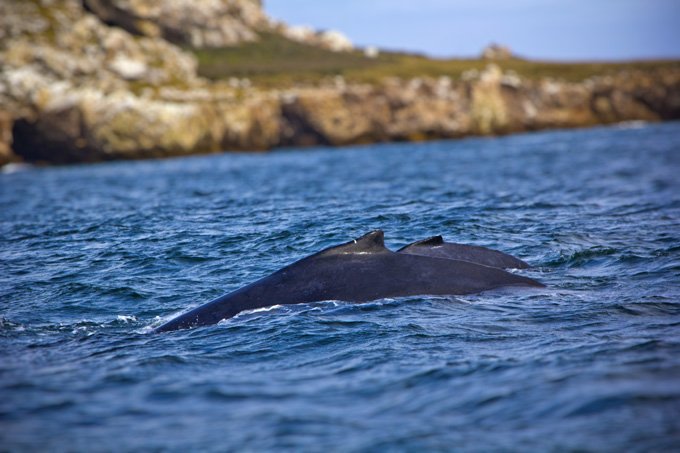 After a while the whales disappeared into their depths, and we headed out towards the Marietas Islands. The sea was a little rough, but manageable, and the sun came out as we approached the islands. Unable to snorkel due to bumpy waters, we cruised around several of the islands, observing the hundreds—thousands!—of birds who live out there. Frigates, pelicans, several types of gulls, brown boobies, and best of all, the blue-footed boobies, with their amazing bright blue feet. We ask ourselves, why did evolution put blue feet on these birds? So they could walk in disguise in shallow blue water? So they could show off? Actually, that is exactly why. The male booby sports the blue feet, and performs an elaborate foot-stepping dance when courting a female. The blue grows paler as they grow older, allowing the fertile young studs with the flashier feet to get all the girls. Sounds familiar, somehow. 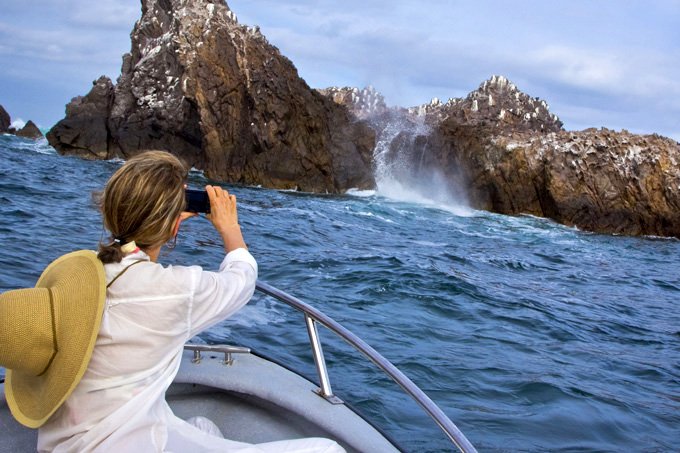 Aside from the abundant avian life, the rocky, blocky, rugged Marietas feature a number of spectacular caves, crevasses, arches, and blowholes, where the water surges in and blasts out in great bursts of spume. The rock formations alone are worth the trip out there; on a day with better weather than we had, there are also a number of fine spots for snorkeling, and the islands’ marine sanctuary status guarantees the presence of plenty of fish to swim with.

But even without taking the snorkel plunge, the trip was enthralling. We saw more whales cruising between the islands, and another group when we headed back to Punta Mita. The return trip was exciting, bounding over the waves, the panga near airborne a couple of times as we flew over the swells. We were back on the beach by the Anclote jetties about two hours after we’d left; after an inspired morning at sea.