Most European visitors will need to change planes in Mexico City for the one hour flight to Puerto Vallarta on Aeromexico or one of several other companies which fly this route. From Canada there are scheduled flights from Vancouver, Ontario and Montreal as well as charter flights from all major cities. From the United States: Alaska, United, American, Frontier, Delta, U.S. Airways and Virgin America all fly to Puerto Vallarta. Gateways are Los Angeles, San Francisco, Portland, Seattle, Phoenix, Denver, Houston, Dallas, Chicago, Atlanta and New York.

Getting to Sayulita from the US or Canada 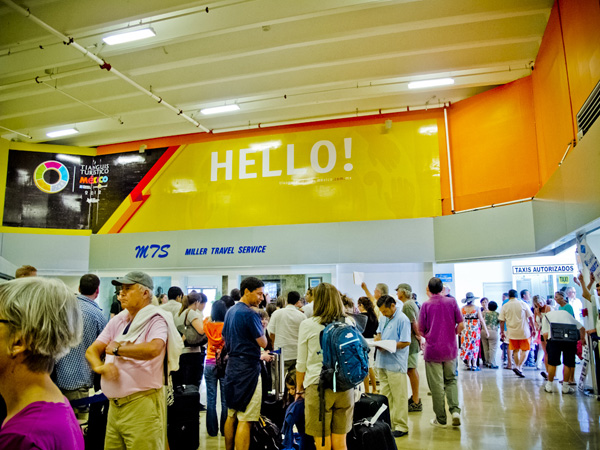 Getting to Sayulita from the US or Canada is as easy as hopping on a plane in a frozen northern city, knocking back a few cocktails or beers, a book, or a nap, and getting off the plane in Puerto Vallarta 2 or 3 or 5 hours later, in the tropics, in the sun, in the land of languor, in what feels like a different world. There are direct flights to Puerto Vallarta from nearly a dozen cities. Flights are frequent and reasonably priced, although the airlines have cut back on the number of flights in recent years, and in some cases raised prices. Competition sometimes shaves ticket prices to as low as $275 for a Puerto Vallarta low-season round-trip from the departure gateways of San Francisco, Los Angeles, Denver, Dallas, Phoenix, or Houston.

Although only a few airlines fly directly to Puerto Vallarta from the northern United States and Canada, many charters do. In locales near Vancouver, Calgary, Ottawa, Toronto, Montréal, Minneapolis, Chicago, Detroit, Cleveland, and New York, consult a travel agent for charter flight options. Be aware that charter reservations, which often require fixed departure and return dates and provide minimal cancellation refunds, decrease your flexibility. If available charter choices are un-satisfactory, then you might choose to begin your vacation with a connecting flight to one of the Puerto Vallarta gateways listed above.

From Europe, Latin America and Australia

A few airlines fly across the Atlantic directly to Mexico City, where easy Puerto Vallarta connections are available via VivaAerobus, Copa, and Aeroméxico. These include Lufthansa, which connects directly from Frankfurt, and Aeroméxico, which connects directly from Paris and Madrid. From Latin America, Aeroméxico connects directly with Mexico City, customarily with São Paulo, Brazil; Santiago, Chile; Lima, Peru; Buenos Aires, Argentina; and Bogota, Colombia. They also connect directly with Guatemala City, San Jose in Costa Rica, San Pedro Sula in Honduras, and San Salvador in El Salvador. A number of other Latin American carriers also fly directly to Mexico City.

Cabs, rental cars, and tour group and hotel drivers congregate at the airport 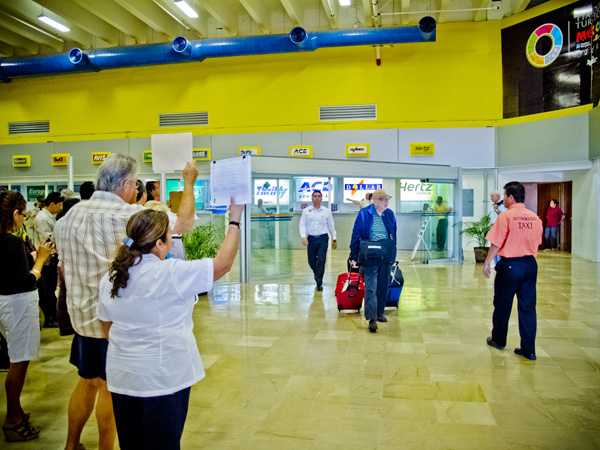 Arriving in Puerto Vallarta, you’ll be welcomed into a recently expanded and updated international airport terminal, with all the amenities. Here, you’ll need some time to go through immigration and customs (especially in high season, when several flights often arrive within minutes of each other) so if someone is meeting you at the airport, take that into account. You might also take the time to get cash from an airport cash machine, as the cash machines in Sayulita charge higher fees and don’t let you withdraw as much cash as do those in the airport.

get cash from an airport cash machine

Incidentally, the most cost-efficient way to get money in Mexico is to withdraw pesos from your American bank account using a debit card—you get the bank exchange rate doing this, while money changers almost always offer a lower rate. Also, assuming you are coming to Sayulita for a week or more, you should probably withdraw the maximum amount, usually 5000 pesos (roughly $400 at current rates, subject to change), since you are charged the same fee whether you withdraw less or more money. It’s good to have cash on hand in Sayulita, as many businesses do not take credit cards, and some that do pass the fees charged by the card companies along to their customers.

Once you get through customs, get your cash, get out of your cold weather clothes and into your sunglasses and sunscreen, you’re ready to head to Sayulita.

Other ways to sayulita