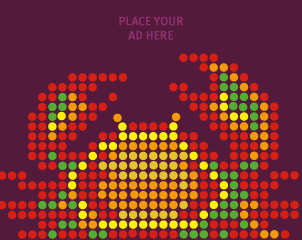 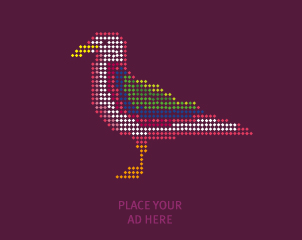 Sayulita is about 22 miles (36 km) north of the Puerto Vallarta airport. From the airport you will cross under the main highway in front of the airport (the ONLY highway in Puerto Vallarta) in a U-turn to head north. If you are renting a car they will take you to their lot which is already on the northbound side of the highway. Drive north in the direction to Tepic.

After approximately twenty minutes you will pass through the town of Bucerias and in a few miles more you pass the turnoff to Punta Mita.

Shortly after the Punta Mita turnoff, the highway changes to a two-lane road and heads up and over a beautiful jungle covered mountain with lots of curves. Watch for animals grazing along the road and slow moving vehicles. You will pass signs for several small villages.

At the village of San Ignacio, a mile or so before the Sayulita turnoff, you’ll find MANY speed bumps. Continue another kilometer (kilometer marker 123) and, at the Pemex gasoline station, you’ll see the turnoff to Sayulita.

From the Puerto Vallarta international airport

Heading north on Hwy 200, Sayulita-bound from the airport 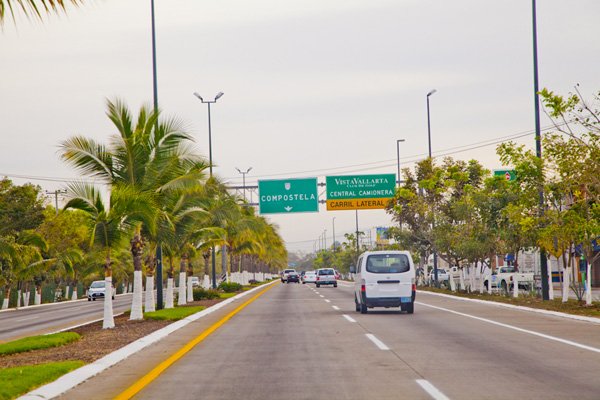 From the Puerto Vallarta international airport, you’ll drive or bus north on Hwy Mex 200. Sayulita is about 22 miles (36 km) north of the Puerto Vallarta airport. Upon exiting the airport follow the signs for Compostela and Tepic. In a rental car (there are plenty of big name rental cars available here, but you will have done better to book this in advance) or cab (500-700 pesos from the airport to Sayulita) you will cross under the highway in a U-turn to head north. If you choose to take the bus (25 pesos, around $2), take the pedestrian bridge over the highway from the airport, and catch a bus that has Sayulita, among other towns, scrawled on its windshield.

A bit of advice

Hwy 200 northbound, with signs for towns en route to Sayulita 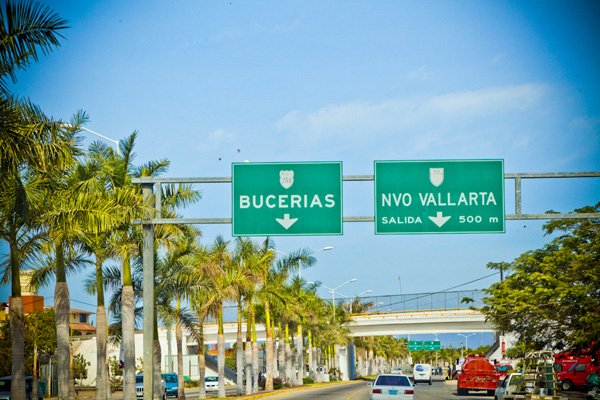 If you don’t mind a short hike with your luggage but don’t want to ride the bus, walk over the pedestrian bridge and take a taxi on the other side of the highway instead of from the airport terminal, and it should cost you about half of what you would pay for the same cab ride from the terminal. Obviously the bus is far cheaper, but will take 15 or 20 minutes longer than the roughly 40-minute cab ride, and it will deliver you to a spot on the edge of Sayulita rather than in the center of town.

If you’re coming from Puerto Vallarta rather than the airport, there are several stops on the lateral road alongside the highway where you can catch a local bus to Sayulita.

Another piece of advice 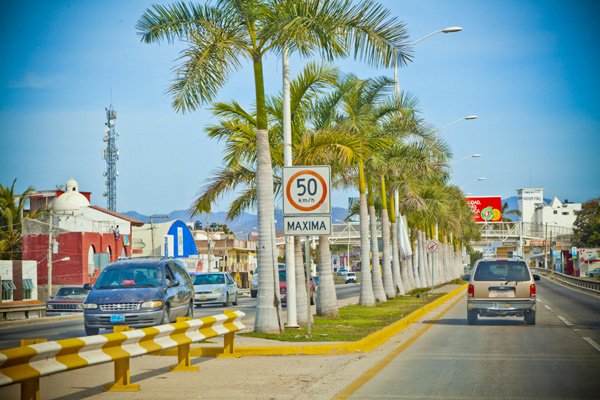 If you are driving a rental car, take it slow coming out of the airport. The local traffic police, called transitos, often set up speed traps just north of the airport, knowing full well that just-arrived, excited tourists are very, very anxious to get to Sayulita or wherever they’re going. These cops will write you a ticket, complicating your life, or, in some cases, they will wait for you to offer la mordida, a bribe, which we can not say you should offer. It’s your decision. Better to not speed.

Shortly after leaving the airport

Heading north from the airport, you soon leave Jalisco and enter Nayarit 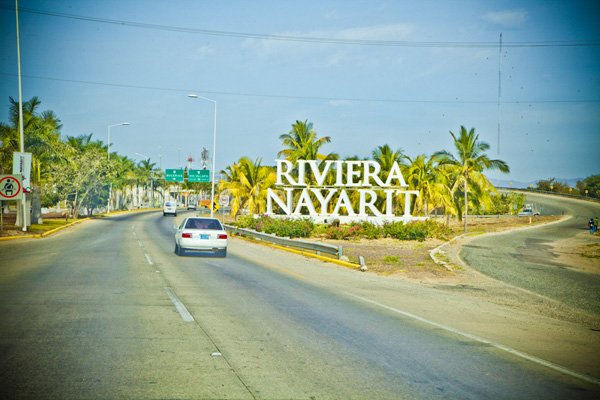 Shortly after leaving the airport you’ll cross the Rio Ameca, which takes you from the state of Jalisco into the state of Nayarit. After approximately twenty minutes of Hwy Mex 200, a very busy commercial highway—you’ll note several American big box stores have bloomed along the way–you will pass through the town of Bucerias. After passing through Bucerias, Mex 200 continues on as a four-lane highway for a few more miles until the turnoff to Punta Mita. Make sure to go straight ahead here.

Slow down as you approach and pass the Punta Mita turnoff, as this is another spot the transitos often use for speed traps.

This part of Mexico is extremely safe 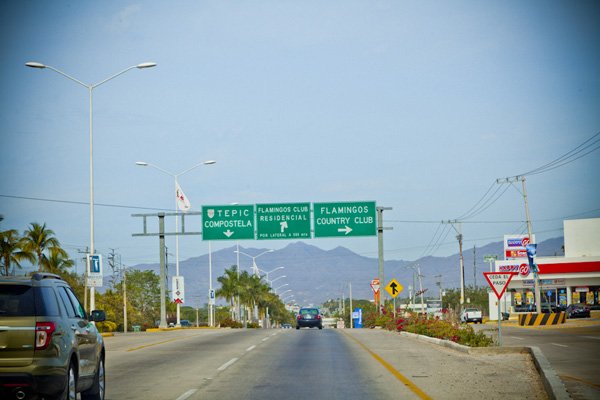 During this drive you might see police of various persuasions—transitos, municipal police, tourist police, state police, and/or federal police, some of whom can look fairly intimidating. Don’t worry, they are there to protect you, although the transitos do like to ticket tourists. And generally speaking, this part of Mexico is extremely safe; driving a car from the Puerto Vallarta airport to Sayulita couldn’t be any easier.

If you need to shop for groceries

Mega is the last big scale supermarket before Sayulita 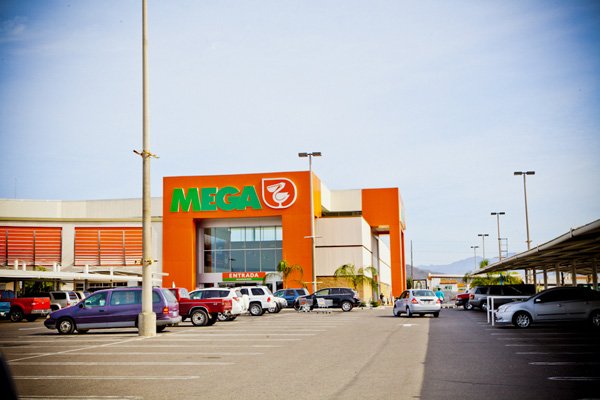 There are plentiful gas stations along the way–all Pemex, it being a national monopoly. These gas stations are almost always accompanied by an Oxxo, a Mexican chain of convenience stores that specialize in junk food. If you need to shop for groceries, a large supermarket called Mega lies just south of Bucerias. You’ll also find a tourism office in the parking lot of the Mega, should you be in need of further information.

Just past Bucerias the road narrows and climbs into jungly hills 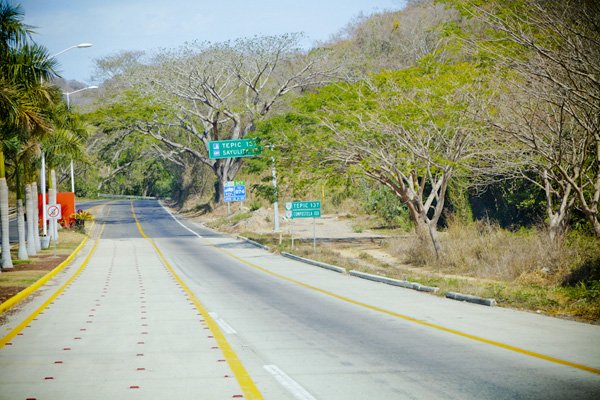 Shortly after the Punta Mita turnoff, the highway changes into a two-lane road and heads up and over a small mountain range in a winding and twisting manner with plenty of blind curves. Watch for animals grazing along the road and slow-moving vehicles. Take it easy, don’t pass if you get stuck behind a slow truck, you only have a short ways to go, and there are a few fairly macho drivers usually to be found on this road. You don’t want to get in their way.

You will pass signs for several small villages. At the village of San Ignacio, a kilometer or so before the Sayulita turnoff, you’ll find MANY speed bumps. Continue another kilometer and, at the Pemex gas station, you’ll see the left turnoff to Sayulita. 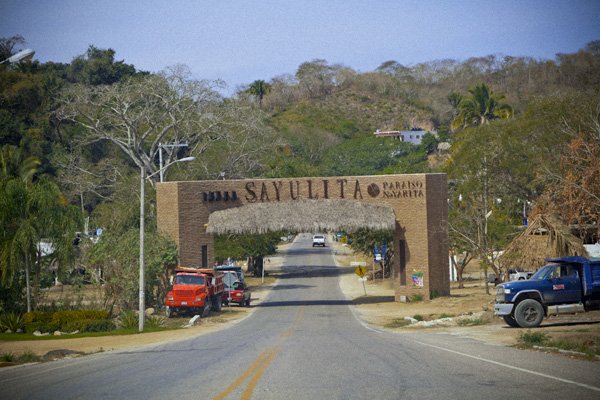 Next you’ll see the grand new arch recently erected to celebrate Sayulita’s importance as a tourism destination. Pass under the arch and make a right at the first turn. Downtown Sayulita lies ahead, but before you reach the plaza you’ll pass from the outskirts of town to the north side, then cross a small bridge and drive a last, busy block or two in our crowded, colorful streets. If your destination lies on the north side, where many of Sayulita’s hundreds of rental homes are located, you’ll probably want to turn right at Calle Miramar, the first right turn onto a paved street as you come into town, just after the bus stop on the left, several blocks before you hit the bridge.

Other ways to sayulita