The strangler fig is surely one of the most visually striking trees you’ll ever see in the rain forest or anywhere else, and there are plenty of them to be seen in and around Sayulita, where they have devoured—or maybe smothered is a better word—many a palm and/or other local tree. If you start looking, you can’t miss the twisting latticework of roots and branches, ascending and descending, wrapped around the host tree, which, depending on how long the fig has been growing, is either still alive or has been killed by the fig. 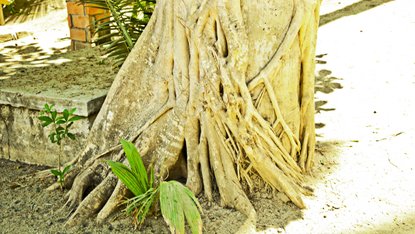 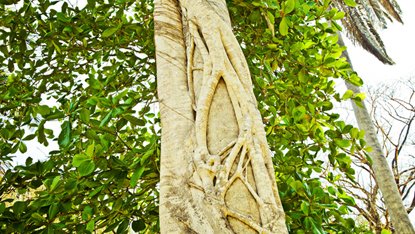 The demise of the host tree comes about because the fig’s crown foliage overshadows the tree, denying it light, and the roots crush and hollow out the host trunk. It’s a long, slow process, relatively speaking (strangler figs are actually very fast-growing, by plant standards) but inevitably, these opportunistic, parasitic plants will strangle the tree that nurtured them. Ain’t nature fun!! If it worked at high speed, the strangler fig could star in a horror movie. Fall asleep, wake up wrapped in a tree that’s sucking the life out of you. On second thought, maybe that movie’s already been made. 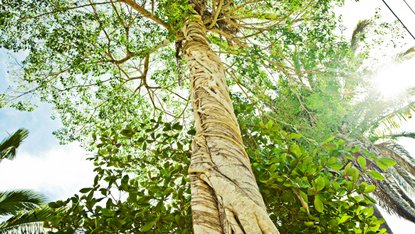 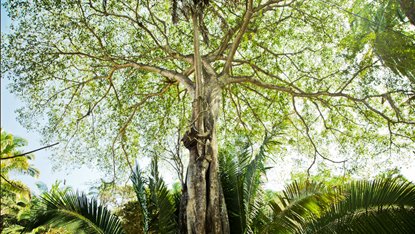 Strangler figs are assuredly interesting creatures—and though they’re plants I call them that because they have such…predatory qualities. There are about 900 different types of strangler figs in the ficus family, found all over the world; they are called hemiepiphytes for their partially epiphytic quality—they begin life taking all their nourishment from their host tree and the air and rain, which is what epiphytes do, but eventually will grow roots down and begin to absorb nutrients from the soil. Thus the hemi- in front of the name. 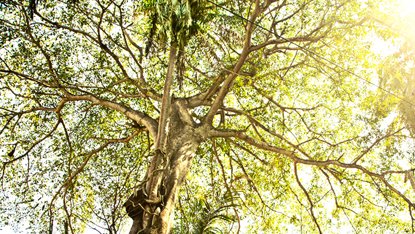 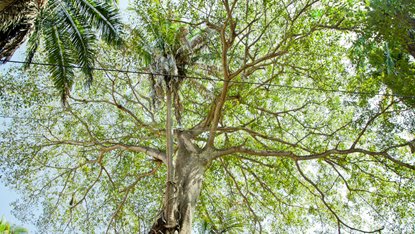 Though they thrive by taking life from the host tree, strangler figs are great providers of life as well. With the hollowed-out dead trunk of the host tree easily accessible through the many openings in the branching roots, the countless nooks and crannies within provide housing for all manner of bug, bat, rodent, bird, and amphibian. They’re like high-rise apartment houses for animal life! Complete with fast food onsite—the figs from the tree are tasty and well-liked by countless different animals, and for several months of the year it is the only edible fruit in the jungle. Additionally, the seeds of the tree are passed along via animal dung, ensuring the distribution of the species. 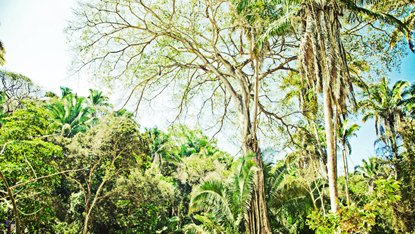 Propagation is carried out in a strange, symbiotic manner—called in one article I read a “mutual evolutionary pollination relationship” with a creature called the gall wasp. Here’s how it works: the figs grow in clusters on stems directly from the tree trunk. Each fig has a hole, just large enough for the pregnant female gall wasp to enter. Squeezing in, she loses her wings, and so, after laying her eggs and depositing pollen, she dies. The hole in the fig closes. Then the male wasp eggs, which develop faster than the females, hatch, and soon chew open the female eggs. They then mate with the females, chew a hole in the fig, and die. The females, tagged with pollen, then head out of the hole, carrying their load of eggs—but their wings are so delicate that they can only make one flight, to another fig tree with the same kind of figs at the same stage of development. So she either does what her mama did, get to that next tree and die, or she fails to find the tree and dies. 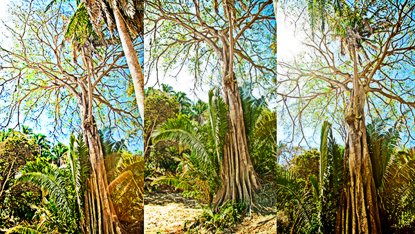 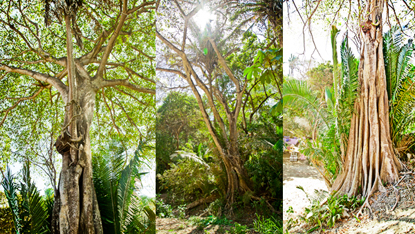 It kind of makes you wonder what is the meaning of existence, eh?

Anyway, these strangler figs can be found around town and especially in the forests and jungles that surround us. Keep your eyes open, you’ll find them. Meanwhile, these photos display a few of them in all their weirdly compelling, haunted-looking parasitic glory.