One of our favorite tacos places in Sayulita is El Bicho (the bug), which resides comfortably under an open air rectangular palapa on Avenida Revolucion, the main drag into town, just a block south of the bridge on the corner of Calle Gaviotas, the street of freelance craftspeople. El Bicho is directly across from the dreadful though undeniably popular junk food emporium, Oxxo. Since El Bicho doesn’t serve any alcoholic beverages, Oxxo is a convenient spot to buy beer to go with your tacos. Other than that, all I have to say about Oxxo, Mexicos’ largest chain of stores, is that many consider the proliferation of these junk food purveyors the single most overwhelming reason Mexicans as a national population now rank among the fattest people on earth. 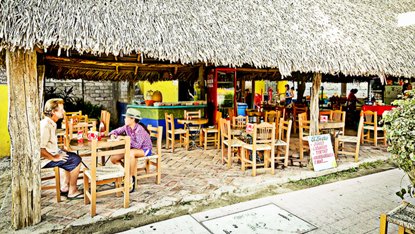 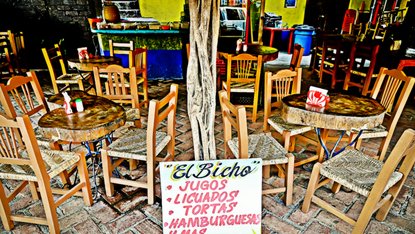 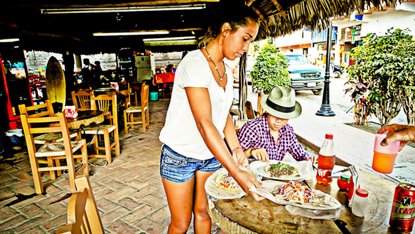 Yes, I know this is about tacos not Oxxo, but I say there is never a time that isn’t appropriate for getting in a jab at Oxxo. Done. Now let’s move on to better and more satisfying fare, those wonderful tacos conjured up at El Bicho. During the day, a completely different restaurant operates under the same name, and offers sandwiches, smoothies, juices, and other fare from an enclosed kitchen in the back. I have friends who swear by the Cubano Sandwich, on the daytime menu. 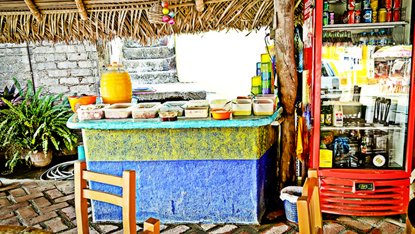 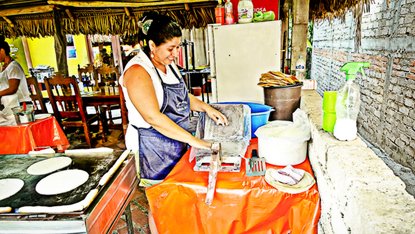 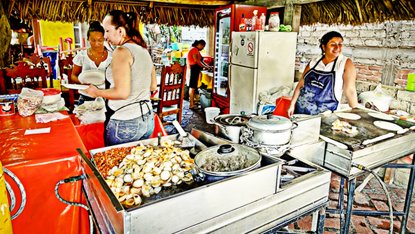 In the evening, the taco operation takes over. At an open air kitchen with deep frying and grilling set-ups, just off the sidewalk at the north end of the palapa, two, three, four or sometimes five women make fresh tortillas, and clean, chop, prep and cook onions, fish, shrimp, and meats, and other ingredients, such as the fresh-grated carrots and red cabbage that comes atop the grilled shrimp tacos. The tacos are invariably perfectly cooked, made to order, fried or on the grill; the tortillas are freshly made, and a table with a colorful and savory variety of condiments stands ready, fully stocked with pickled onions, fresh chopped nopal salad, sliced cucumbers, a pot of beans, radishes, sliced limes, avocado sauce, and half a dozen red and green salsas ranging from mild to killer. 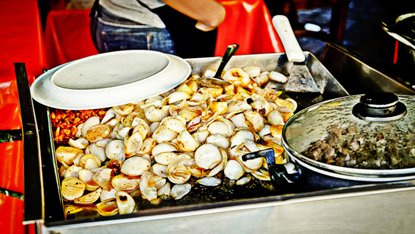 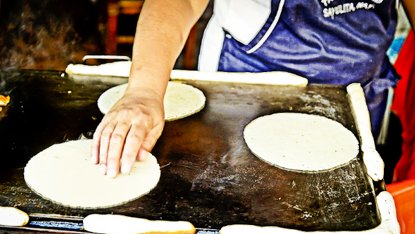 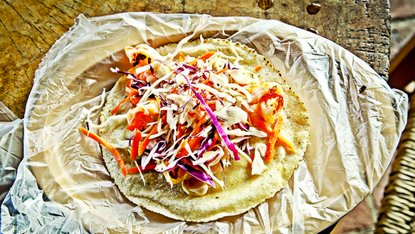 They bring the tacos on plastic plates wrapped in plastic, then you get the condiments for yourself. There is no silverware, not even plastic forks, so eating at El Bicho can get kind of messy. Daniela the waitress, who grew up in Las Vegas, Nevada and is fluently bilingual, explained that some of the craft vendors from the adjacent street would order one taco and then continuously reload their plates with beans, salsa, and other condiments—taking advantage of the serve-yourself set-up to make an all-day meal for a buck. You can’t blame them for trying, but you can’t blame the restaurant people for trying to stop them. 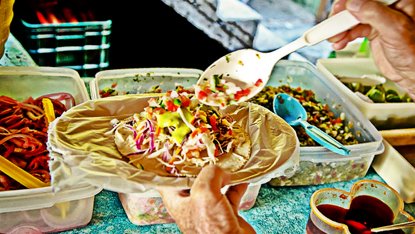 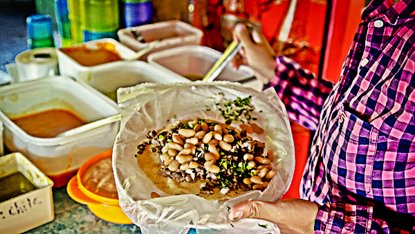 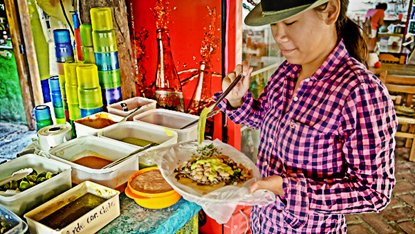 Prices range from 10 to 25 pesos or so, and if you pile on the condiments—only once, please—one or two tacos is more than enough. Fresh grilled fish or shrimp, fresh vegetables on top, a tableful of salsas and extras—this is a fabulous $2-3 dollar meal, lubricated with beer from the—ugh—Oxxo across the street.