Sayulita’s Mercado del Pueblo continues its evolution into an integral part of the community, which has not necessarily been easy. In the past two years Manager Lina Weisman has moved the market from Sayulita’s downtown Casa de Cultura to Calle Pelicanos by the river to an empty lot by the delegado’s office on Calle Miramar, where things appeared to be set, at least for this season–until the lot abruptly was sold and construction on a hotel began about two weeks ago. 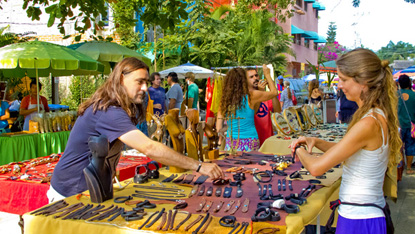 The ever-resilient Lina jumped into negotiating mode, and the next thing we all knew the market had taken over the entire block of Calle Miramar in front of the previous empty lot location. This hassle turned into a blessing, as this stretch of Miramar has some good shade trees, plenty of space, and another empty lot which is now part of the market. Close the block to traffic for five hours, and there it is: Mercado del Pueblo. 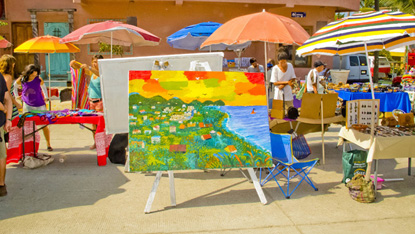 In another change, rather than try to limit the products available in the market to organic, locally produced foodstuffs, raw and/or cooked, Lina has now embraced the presence of the many artists and craftspeople who had been gathering around the edges of the market every week, taking advantage of the crowds to sell their own work. So now along with your delicious edibles, you can buy arts and crafts. 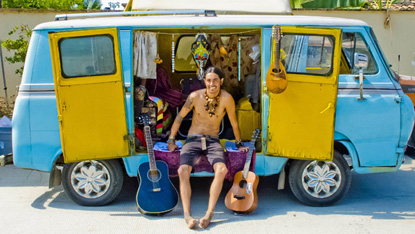 There are 20 artists and four craftspeople in the mix now, selling everything from fine art oil paintings to jade necklaces. There is also the usual motley crew of tatted, pierced, and painted hippies juggling, face-painting, dancing, playing music, and generally entertaining everybody with their antics. It’s a wonderful, lively scene, and a great place to eat, shop and socialize. Don’t miss it. 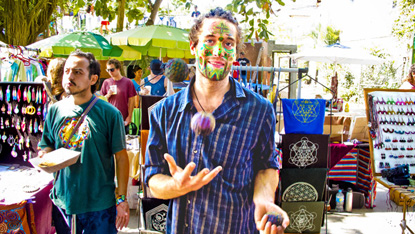 Don’t miss the smoothie maker who powers his blender by pedaling a bike. Calle Miramar west of Revolucion, every Friday from 10 am to 3 pm.