The first time I saw this bird, I was stunned. A flock of them had roosted in a clump of trees I walked under, and noticing them–they were making a lot of noise, yakking away–I assumed these birds were some local version of a blackbird, with yellow markings. Then they took off, in a huge explosion of yellow and black, the contrasting colors a visual showstopper. Since then—this was not long after I moved here four years ago—I’ve seen them dozens of times, in numbers ranging from pairs up to flocks of several dozen, and they never fail to stop me in my tracks. Their yellow markings are just amazingly bright, especially contrasting with the black. You don’t see it so much when they’re roosting, but then, when they take off, the yellow underparts of the wings and tail explode into sight, and it is riveting to watch them fly. 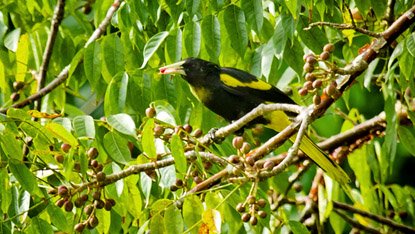 They’re known as Yellow-rumped Caciques (Latin name: Cacicus cela), or Calandrias, and their territory is supposed to be mostly in Central and South America, especially Peru. But they are all over the place around here, where they seem to be thriving because people have cleared land and opened the forest up, and these birds like open habitat zones. They’re noisy and gregarious, and often can be seen hunting their food (insects and fruit) in the vicinity of Green Parakeets, Magpie Jays, and Chachalacas. All these birds seem to enjoy each other’s company, in whatever way birds experience such things. 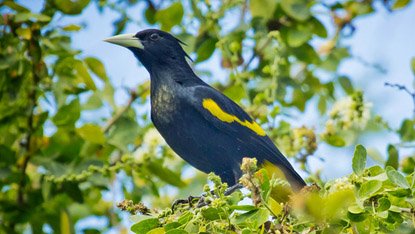 The Caciques create beautiful hanging nests that look like bags made of plant fiber, often in groups or clusters, usually near a wasp nest, as it appear wasps keep away a parasite that bothers the birds. According to Peruvian folklore, there was once a loud boy who always dressed in black pants and a yellow shirt. He was telling cruel stories about an old woman, who turned out to be a witch. She turned him into a noisy, wandering bird. Oddly enough, the Yellow-Rumped Cacique does have blue eyes, an uncommon trait in birds, not so uncommon in boys.